When I first went plant-based, I remember ordering a pizza without the cheese. I thought it couldn’t possibly be that bad. But it was. It really was.

A good vegan pizza absolutely needs something on it to replace the cheese. There are some awesome vegan mozarella-style cheese alternatives available, but they can be expensive and a bit too processed for my liking.

The herbed cashew cream on this pizza leaves nothing to be desired. It has a cheesy flavour and adds a bit of creaminess that would normally be missing without the cheese.

The base is made from wholemeal spelt flour, so it’s not gluten-free (sorry Coeliac friends). However, if you are just a bit gluten-sensitive like I am, you might find that spelt is a lot more gentle on your gut. This is because spelt contains more soluble fibre than wheat. Soluble fibre absorbs water and turns to a gel-like consistency as it digests, making it a lot less harsh on your system.

Spelt is also higher in protein and richer in vitamins and minerals compared with wheat flour.

If you have the luxury of a food processor with a dough blade or benchtop mixer with a dough attachment, awesome. If not, you’re in for about 10 minutes of hand-kneading. But hey, it’s a good arm workout! This recipe is also a lot less complicated than many other pizza bases I’ve tried. You can divide the mixture into either 2 or 3 portions depending on how thick you like it. I prefer thinner pizzas so I divided it into 3.

As with all home made pizza, anything goes, so I’m not going to tell you what you should put on top! Except for the cashew cream – that’s a must. I was in a green kinda mood when I made this one. I used a little red onion, zucchini, broccoli and then I topped with fresh avocado slices after it came out of the oven.

Whatever toppings you choose, par-cook them in a fry pan before adding them to the pizza. It’s only in the oven for 15 minutes, so for pretty much everything except mushroom, that’s not enough cook time. Don’t know about you but I’m all for crunchy vegetables in a stir-fry, just not so much on a pizza :-/

It’s important not to add your cashew cream until the pizza is out of the oven. If you put it on before it will dry out big time. I like to buzz it up just before the pizzas are due out of the oven so it’s still a little warm from the blending process.

When it comes to pizza sauce I like to keep it simple, so a quality (preferrably organic) tomato paste seasoned with a little salt & pepper is just perfect. A clove or two of fresh minced garlic mixed into it doesn’t go astray either. You can sub your favourite pizza base sauce if you wish.

Nothing like healthy, crispy home made vegan pizzas for a midweek dinner! 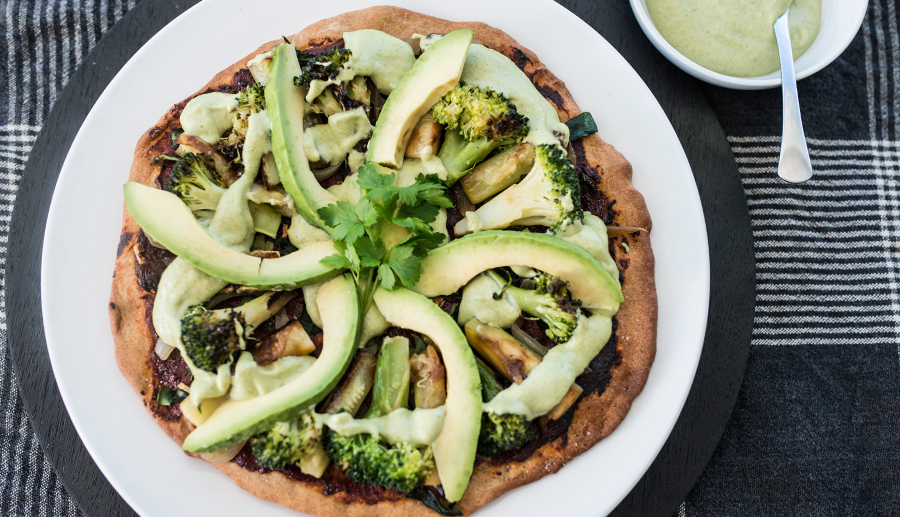 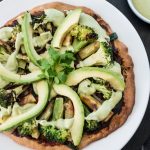 Course: Main Course
Cuisine: Italian
Keywords: Herbed Cashew Cream, Vegan Pizza, Wheat-free
Ingredients
For the Base
For the Cashew Cream
For the Topping
Instructions
To Make the Base
To Prepare the Toppings (while dough rests)
Final Steps
Recipe Notes

*I used spanish onion, broccoli, zucchini (all par-cooked prior to adding to the pizza) and fresh avocado.