If you’re an Aussie like me and are familiar with the vegan dairy alternatives available in Australian supermarkets, you’ll probably remember that for a short time in 2019/20, Woolworths stocked a killer brand of vegan cultured cashew cream cheese called Miyoko’s.

If you live in a country where it’s readily available – lucky you! The US product range is based on fermented cashew cream using organic, non-GMO, super clean ingredients. And the whole range tastes totally ah-mazing.

The downside for us was the price – ranging from $12 AUD for the cultured butter to $18(!) for 184 grams of the cheese wheel varieties, people just weren’t forking out for it.

When they clearly weren’t selling, Woolies started clearing them out at half price and I was one of those crazy people who stocked up on it like toilet paper during a pandemic… (too soon?). I froze a whole bunch, and when I realised I was down to my final stocks I started freaking out.

But then I remembered how simple the ingredients were, and started experimenting…

So this is my version of the Miyoko’s cultured vegan cream cheese and it’s super simple, healthy and delicious – just like the original.

What Is Fermented Cashew Cream?

Fermented cashew cream is simply cashews that have been soaked in filtered water for 3-6 hours, drained and blended with a liquid (water/plant milk/coconut cream) and then fermented for a couple of days with the aid of some cultures. I use good quality probiotic pills as the culture as I always have these in my fridge, but you can also buy vegan cheese starter-culture which will do the same trick.

For this recipe – in line with the Miyoko’s cream cheese – we use water and coconut cream as the liquid for creating the cashew cream. If you are wildly against coconut cream then you can swap it for your favourite plant milk and add a teaspoon of a neutral-tasting oil such as organic sunflower or macadamia oil instead. This should result in a vegan cream cheese that’s equally-as-creamy. 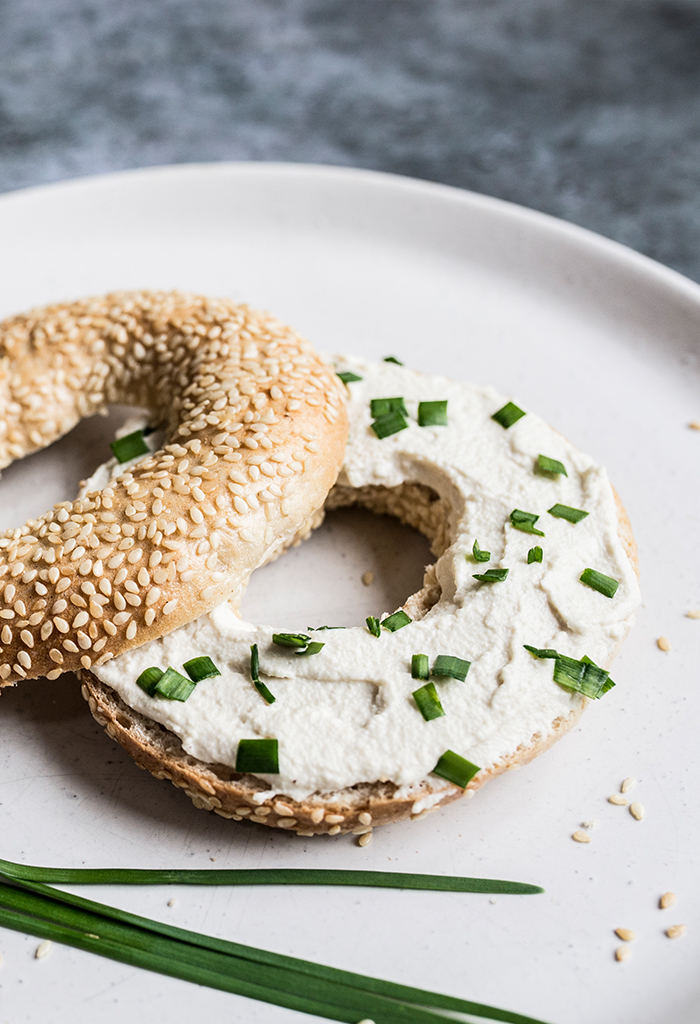 Trust me though – by the time the fermentation has done it’s thing and added that delicious tang to the cream cheese, you honestly can’t taste a coconut flavour at all.

The only other ingredient is a sea salt which not only adds flavour to the cheese, but helps prevent the cashew cream from developing bad bacteria during the fermentation process. So don’t be tempted to leave it out!

Don’t be afraid of the word ‘cultured’ – the process to make this unbelievably good, wholefood plant-based cream cheese is SO simple.

Once the cashews have been soaked in filtered water for a minimum of 3 hours (but no more than 6 hours), we add them to a blender with the water, canned coconut cream, salt and probiotics and blend until it’s ultra-smooth. 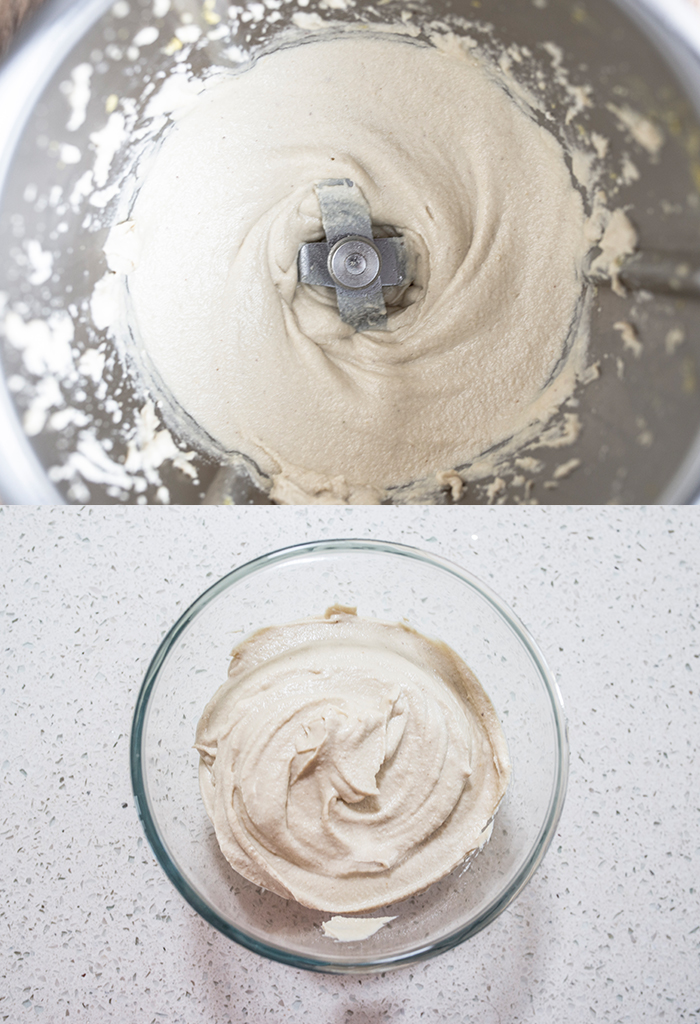 The cashews will be soft enough that any old blender should give you a really smooth cashew cream, especially since there is a good liquid to cashew ratio in this recipe.

Transfer it to a glass or ceramic bowl. Fermentation should never be done in a metal bowl as it can react and interfere with the fermentation process. Some people suggest that the cultures should not come into contact with any metal at all – even during the blending process – however it’s not a problem as long as the mixture is not in contact with metal for long periods of time, or while fermenting.

The bowl is then covered with a clean tea towel or a couple of layers of cheese cloth and secured with a rubber band. We then leave it to ferment for anywhere from 24 – 72 hours.

The trick is to taste it every 12 hours (starting at the 24 hour mark) and once you are happy with the level of tang, it’s good to go. Obviously the longer you leave it, the tangier it will become. Here in my climate where the daytime temperatures range between 20 – 30˚C, I have found 36-48 hours to be the perfect fermentation time (the hotter the temperature, the less time is needed and vice-versa).

Just be careful to use very clean utensils when taste-testing so as not to introduce any bad bacteria to the mixture. And replace the cover ASAP for the same reason.

After the first day, you may notice a hard-ish layer developing on the top of the cheese, so you can either give it a good mix with a fork every 12 hours or so, or just leave it and throw it back in the blender before refrigerating. It is not at all harmful.

The ONLY thing that can go wrong here is the development of bad bacteria – if you see anything that looks like mould you will need to dump the whole lot. In all the many times I’ve made this, it’s only ever happened to me once and I’m quite sure it’s because my 3-year-old managed to sneak a grubby little finger into the mix while it was fermenting!

So yup, it’s that easy. Why I waited so long to start with homemade fermented vegan cheese is beyond me. There is nothing to fear and only deliciousness to gain 😉 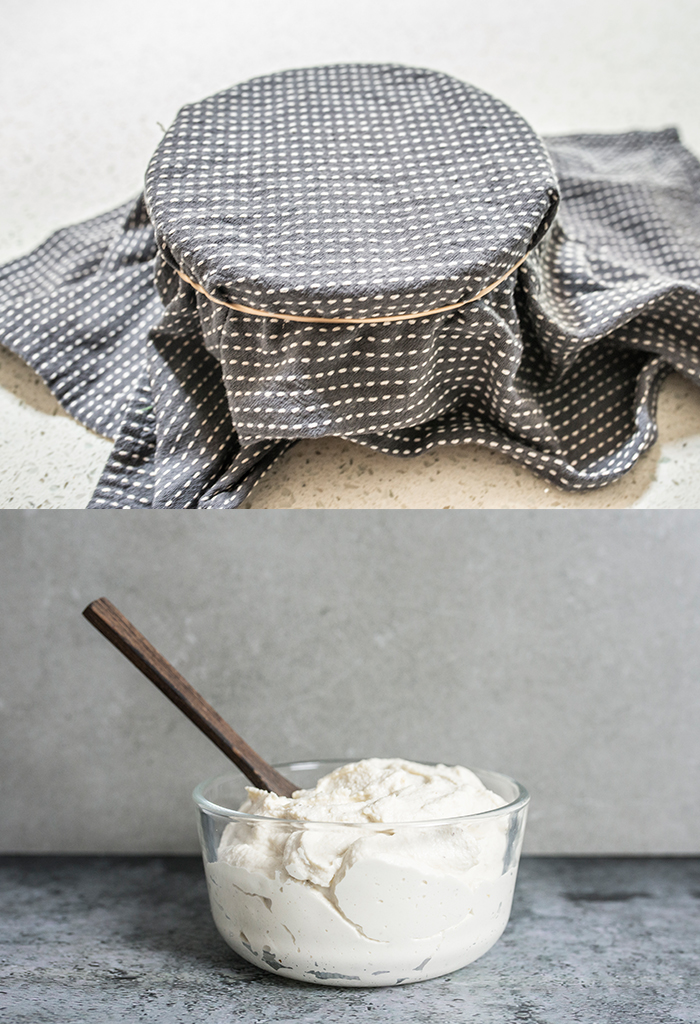 The beauty of this cultured vegan cheese is that thanks to the fermentation, there is an abundance of good bacteria in the final product. This has amazing benefits for your gut but also means that the cream cheese will keep for longer in your fridge.

Non-cultured cashew cheeses will only last about 3-4 days in the fridge, but this fermented version should last at least 2 weeks stored in a glass container. Always taste it if in doubt – it will taste “off” if it’s going bad.

I find that the higher the quality of probiotics I use, the longer the cheese lasts. For this reason, if in doubt about the quality of your probiotic capsules, use 3 instead of 2. I mostly use the Bioceuticals brand UltraBiotic which has a high level of quality strains, so 2 is always enough.

This recipe makes quite a large batch (approx. 500 grams) of cultured cashew cream cheese, so if you don’t think you’ll use it all within the 2 weeks you can freeze it. It will last in the freezer for up to 6 months.

Your gut will love this one just as much as your tastebuds! Enjoy x 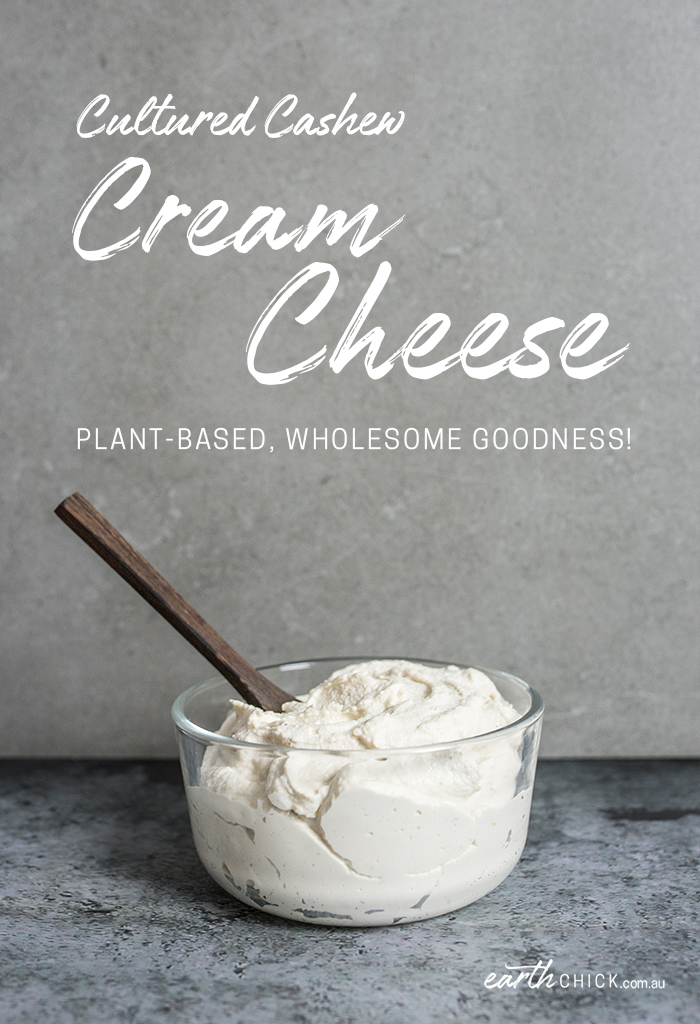 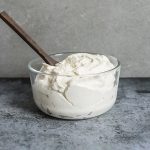 *Choose a good quality brand of probiotic capsules for the best benefits for the cheese (and your gut!). If in doubt about the quality of your capsules, use 3 instead of 2.