When I first heard of a risotto made with pearl barley, my eyebrows were raised. But this has become one of my favourite easy vegan dinners, because it’s so darn tasty.

Don’t expect the texture to be the same as that of an arborio (i.e. ‘a boring old’ – har har) rice risotto… it’s very different, yet so satisfying! Barley has a grainy texture and a slight “chewyness” (in a good way) even when fully cooked. However it produces a nice nutty flavour that you don’t get from rice.

Nutritionally, pearl barley is higher in dietary fibre than rice, but unlike rice it does contain a little gluten. If you’re gluten intolerant or Ceoliac, you can definitely substitute brown rice for the barley in this recipe. 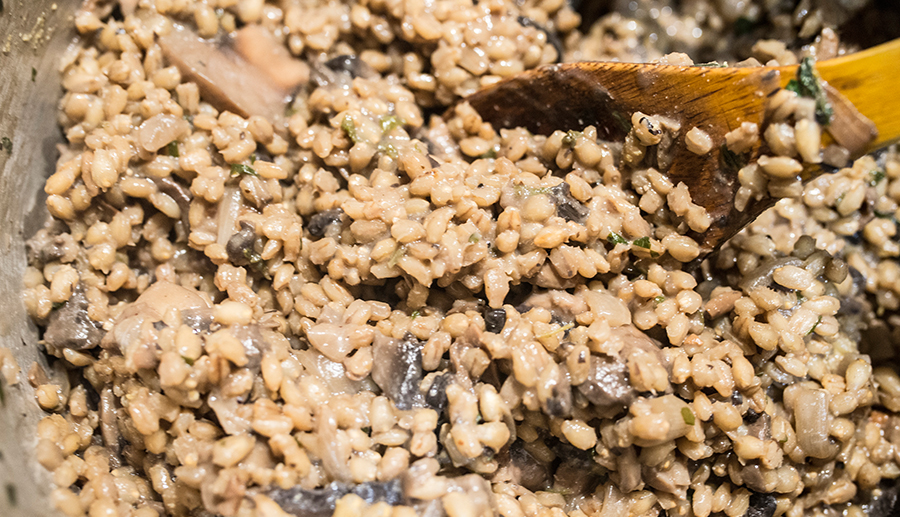 To Soak or Not to Soak the Barley?

There seems to be some conflicting ideas out there as to whether or not pearl barley should be soaked in water prior to cooking. I’ve made this a few times and tried soaking it for 4 hours prior, and then not at all. I honestly could not tell the difference. So I say, save the water and get straight to it!

The first couple of times I made this I used red onion rather than leek. You know when there’s just something missing but you can’t put your finger on it? In this instance, it was the leek. When I swapped the red onion for the leek it was a game changer. I took one mouthful, raised my fork in victory and declared that it was finally “blog-worthy”! The leek definitely adds an incredible flavour that plain old onion tends to leave you wishing for.

Use a good quality organic, vegan white wine. There’ll be plenty leftover for you to sneak a glass while you’re cooking.

A Word About Crispy Sage…

Not gonna lie, I was never really much into sage as a herb. That was until I discovered that it actually transforms into the most divine herb in the WORLD when it’s lightly fried! I used half coconut oil (as it has a high smoke point) mixed with half vegan butter to give the sage a nice buttery flavour.

The trick to getting the sage perfectly crispy, is to to remove it from the oil the very second it starts to crisp up. Gently poke the leaves with your tongs and as soon as they start to hold their shape, it’s time. Heat goes off, then scoop them out as gently and fast as possible with a slotted spoon and on to some paper towel to drain.

You can get away with the leaves being lightly browned, but as soon as they turn dark brown it’s not going to be good. And this can happen very, very quickly once they start to crisp so just keep that in mind.

The addition of the coconut cream at the end is sooooo worth it. Unlike rice, pearl barley doesn’t release starch during the cooking process, which is what makes “real” risotto nice and creamy. A little splash of coconut cream to this risotto takes the edge off the texture of the barley and gives the dish a nice consistency. Again, if you’re not a fan of coconut cream you can substitute for 1 cup of your favourite plant milk instead.

Hope you love this – don’t forget to let me know in the comments! 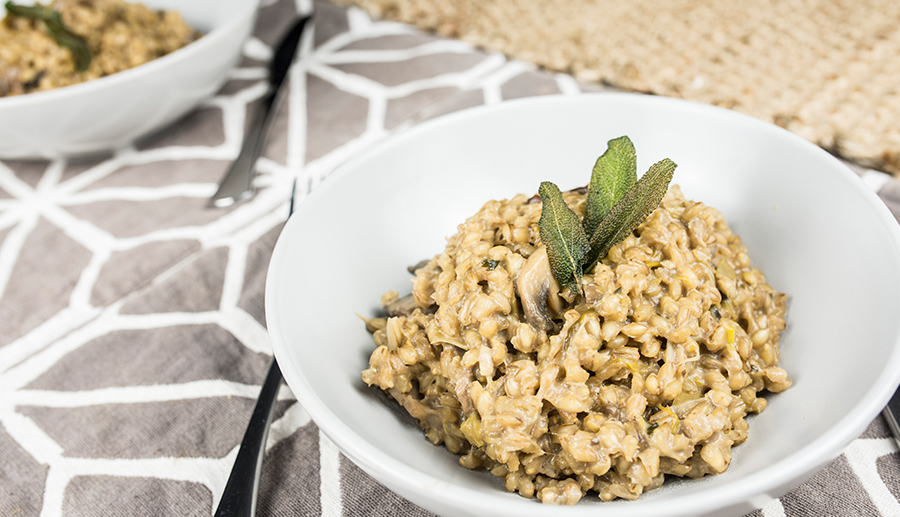 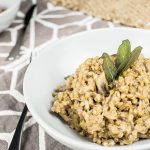 Rich, nutty and totally plant based