Gotta laugh at people who think that salads are boring. Salads can be anything you want them to be! I do love me a good salad but it HAS to be fun and interesting. This kelp noodle salad is no exception. It tastes as good as it looks and is so simple to whip up.

I’m on a bit of a mango bender at the moment because they are in season here, and just so. damn. delicious. I’m also loving kelp noodles at the moment  – have you tried them yet? It took me a long time to get around to them as I thought they were going to taste like seaweed.

I was super happy to discover that they actually have an incredibly neutral flavour. Kelp noodles literally taste of nothing, yet they contain many of the same amazing vitamins and minerals found in sea vegetables. They’re rich in calcium, iron and vitamin K and are a good source of iron, calcium and vitamin C too. They’re also a super low-carb and gluten free alternative to regular noodles.

The greens in the salad are rocket and fresh mint, which I have in abundance in my veggie garden right now. Then I threw in some fresh radish just because I had it, but it was a great decision. It added a sassy flavour with a colour to match.

I don’t know about you but I can’t stand most store-bought salad dressings and they are truly the easiest thing in the world to make yourself. Especially if you have my number one most-recommended kitchen appliance and that is a small single-serve blender. Something like a Magic Bullet. It’s honestly a godsend for buzzing up dips, dressings, cashew cheese, you name it. So handy.

The dressing is just peanut butter, apple cider vinegar, tamari, lemon juice and a bit of fresh ginger. It pairs perfectly with this salad, which I think is probably the prettiest salad I’ve ever seen. Some raw or toasted peanuts would also not go astray on this salad for a bit of a crunch.  I have no doubt this will become a summer fave for you like it has for me! 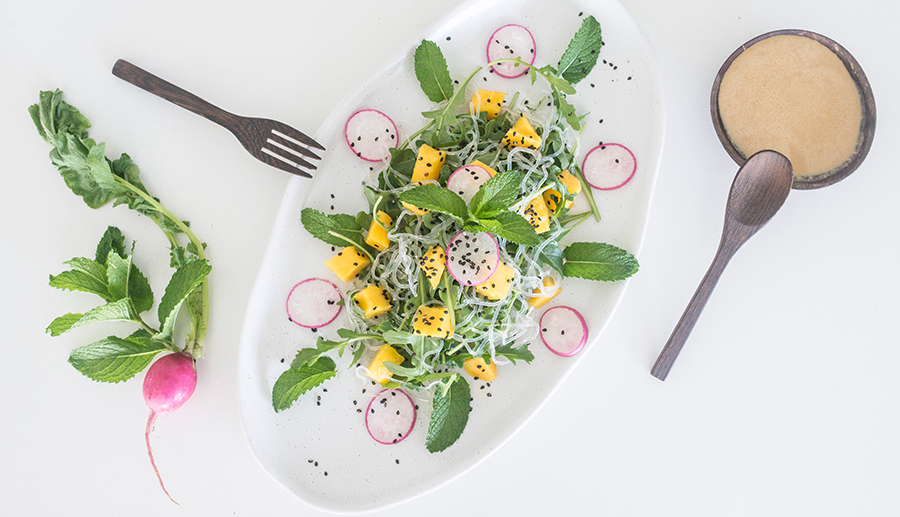