GMOs Part 2: How to Avoid Them

In Part one of this series on GMO foods, I discussed my top 3 reasons that you might want to consider boycotting them.

Here in Part 2, I want to cover HOW to avoid GMO foods – because it’s really not as easy as you might think!

Here are 5 steps you can take to ensure that you are keeping them out of your life, for the sake of your health and our planet’s…

GMO laws are usually set on a state-by-state basis, as with most laws. So it will be a case of checking in with your state or provincial government for the current legislation.

If you’re using Google, make sure you check that you’re reading current information, as GMO laws have been known to fluctuate quite a lot over the years since they were introduced and states or countries will often enforce “temporary” laws around them.

So for example, here in Australia, the only GMO crops that are legally grown are canola, cotton & safflower. But we can legally import foods that are derived from genetically modified potatoes, corn, soybeans, sugarbeets and rice. And finally, we sadly have no mandatory labelling of GMO foods – yet – except for those that are of a specific type, containing Novel DNA.

Europe, on the other hand, is on top of their game, with every single country in the EU enforcing mandatory labelling of GMO foods, and what this has done is inadvertently encouraged food producers to eliminate all GM food sources from their products, to avoid having to display the label.

So the mandatory labelling laws have a positive knock-on effect for minimising the presence of GMOs on supermarket shelves.

Step 2. Know which foods are likely to be GMO

Once you know the legislation around GMOs in your state or region, this will give you a better idea about which foods you need to be wary of.

If you learn that it’s legal to both grow and import GM corn in your region, you might want to steer well clear of corn, unless of course it’s organic or labelled non-GMO.

In the US, the most common GMO food crops are canola, corn and soybean. It’s now approaching 100% of all soy crops in the US are GMO. Crazy!

And no, it’s not the vegans who are are eating it all. Soy is actually found in a very large percentage of packaged foods. This is because it’s easy and inexpensive to grow in a diverse range of climates and it’s also extremely versatile in terms of its uses.

The same goes with corn, which is why you will also find corn hidden in many packaged foods.

But actually, the biggest use for GMO food crops around the world is animal feed. In the United States alone, at least 35% of all corn crops, and 75% of all soy crops are used to feed livestock for the meat & dairy industries.

To go slightly off-topic here, I just want to mention that it’s estimated that 33% of all agricultural land is solely used for producing livestock feed. This doesn’t include the other 44% of agricultural land that is used to actually raise livestock.

The figure below shows this, with a total of 77% of all agricultural land in the world being used for the meat and dairy industries! 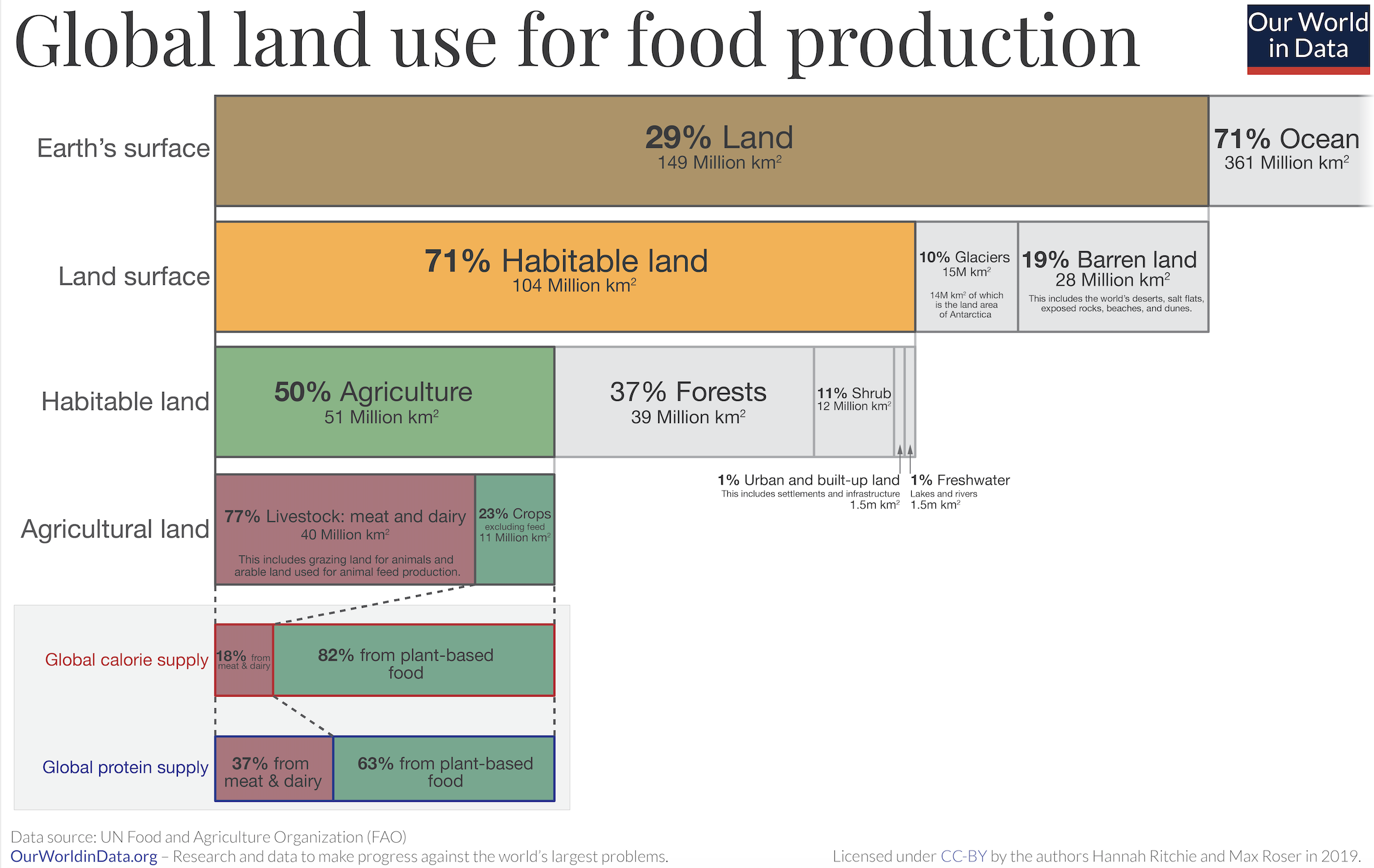 But the main point here is that environmental concerns aside, a really great reason to drastically reduce your meat & dairy consumption is that in most cases, the livestock have been fed GMO food. Every meal, for their entire lives.

You can double check the laws around GM stock feed for your region, but here in Australia there is no legislation against it and farmers here are allowed to, and therefore often do use both local and imported GMO feed to sustain their livestock.

Wondering what the issue is with this?

Glyphosate and other herbicides accumulate in the tissue and particularly the collagen of animals, and what doesn’t accumulate there is discharged in their bodily fluids. Which, of course, includes a cow’s breastmilk.

So it goes without saying that eating animal products that have been raised on GMO food, is likely going to come with a good hit of glyphosate.

Another one of the many reasons to avoid dairy products is that in many countries, dairy cows are injected with a growth hormone, known as RGBH, that is derived from GMOs.

So check the laws on the RGBH growth hormone in your region as well, if you do choose to consume dairy. Thankfully it’s already been banned in a number of countries, including Australia, due to legitimate concerns over it’s impact on human health when it ends up in dairy products.

Another common ingredient that is often GMO is actually sugar. If it comes from sugarbeets, as opposed to cane sugar, it is very likely to be GMO. Sugarbeets are a major GM crop grown in the US and this form of sugar is added to a lot of packaged foods that are circulated around the world.

By far, the easiest way to avoid GMOs in your diet is to choose certified organic foods, which are not allowed to derive from GMOs, and to minimise your consumption of packaged foods.

Fresh produce from your local markets is generally a lot less likely to be derived from GMOs, so if you don’t think you can afford to buy organic, try your local farmers market and keep an eye out for “spray free” produce. This is usually much cheaper than certified organic and is still going to be much better for your health when the farmers are not using any herbicide or pesticide sprays directly on the produce.

The US is the country with the most GMO fresh produce, in terms of what can legally be grown and sold. So if you do live there, all the more reason to shop at your local markets because you can chat directly to the farmers and ask them if their produce is GMO-free. And be especially wary of apples, papaya, potatoes, squash, alfalfa and of course – corn.

In chatting directly with the farmers, no matter where you are in the world, you’ll probably find that many small local farmers are actually against GMOs. It’s good to have those conversations and also just to build relationships with the people who grow your food 🙂

It’s estimated that up to ¼ of all processed foods contain GMOs to some degree. This figure is much higher in the US, with closer to 70% of all supermarket foods containing GMOs.

So at the very least, you want to be carefully reading the labels of any packaged food that you purchase, if they are not certified organic.

Especially when it comes to canola, corn and soy products, which are consistently the most common GMO food crops throughout the world.

But as we know, there are quite a few handy and relatively healthy packaged products that these things produce – things like corn flour, popcorn, polenta, soy milk, tofu, miso, soy sauce – all things which you are not likely to make at home.

So just make sure that when you buy these products you are buying them organic, or at the very least checking that they are labelled ‘Non-GMO.’

You can also look out for products that have the ‘Non GMO Project’ verification label, which guarantees that the product has no more than 1% GM ingredients. They believe this is a realistic standard given the possibility of cross-contamination, which I would agree is pretty fair.

Step 5. Watch out for GMOs in unlikely places

You can find GMOs in some pretty unlikely places, and one of these is your supplements. Vitamin C is one to especially look out for, as ascorbic acid is often derived from GMO corn.

Generally speaking if you can, check that all your supplements state non-GMO, but particularly your vitamin C.

Another one is “vegetable oils”, which are not really vegetable oils at all. In fact most are a blend of hydrogenated oils that are actually shockingly awful for your health, and often contain GMO canola, rapeseed, corn or cottonseed oil.

Unfortunately, these oils are extremely cheap and are therefore the choice for most restaurants with large deep fat fryers, so any fried foods that you purchase at restaurants or fast food places are most likely GMO.

Also, aspartame – which is a nasty, nasty, artificial sweetener – is made from GMOs, so avoid things like diet & “sports” drinks and pretty much anything labelled “sugar-free”, as most of these foods and drinks contain it.

If you want to take active action to boycott GMOs, contact your local government and tell them of your concerns about genetically modified food.

Press for mandatory labelling of GMO foods in your state or country if they don’t exist, because this is a very realistic first step in minimising the amount of GMOs we will find on supermarket shelves.

But just simply by not choosing not to buying into GMOs, you’ll be doing your part in minimising the demand for them, and by instead choosing local, organic (where possible) fresh and real foods, you will be instead supporting the kind of agriculture that is going to support your health as well as our planet’s.

Again, please go and do your own research on this topic, let me know your thoughts in the comments and drop me a message if you think there’s anything I missed.