Are Oats Gluten Free in Australia?

Are oats gluten free, or not? And why can’t you buy gluten free oats in Australia? Let’s get this cleared up, because it’s definitely a topic of confusion, even if you are from the Northern Hemisphere where you CAN buy gluten-free oats!

If you follow a gluten-free diet in Australia, you probably tend to avoid oats, as you’ll find it impossible to find any that are labelled gluten free.

Why Can’t I Buy Gluten Free Oats in Australia?

It’s all to do with the Australian Food Standards Code (AFSC). Currently, the available tests for measuring gluten in foods only test for the types of gluten found in wheat, barley and rye. There is no test for the type that is found in oats, therefore the AFSC does not allow any Australian oat products to be labelled ‘gluten-free.’ You can read more about this by clicking here.

The regulations are different in the US and Europe, who allow oats that have been cleared from contamination with wheat, barley and rye to be labelled as gluten-free.

This is because the protein in oats that is most similar to the gluten protein found in wheat, rye and barley – known as ‘avenin’ – will not cause a reaction in most coeliacs.

As I just touched on, oats contain a protein (or prolamin) called ‘avenin’, which is a type of gluten. Although, there does seem to be some scientific debate as to whether or not it actually is gluten. At the very least, it is very similar to gluten.

However, avenin has a different structure to the glutens contained in other foods (such as wheat and barley) and is tolerated by most people with ceoliac disease.

The problem for ceoliacs with many conventionally grown oats though is cross-contamination with gluten-containing foods.

Here in Australia you can find oats labelled with such things as ‘wheat-free’, ‘uncontaminated’ and/or ‘gluten-friendly’, such as these ones by Gloriously Free Oats: 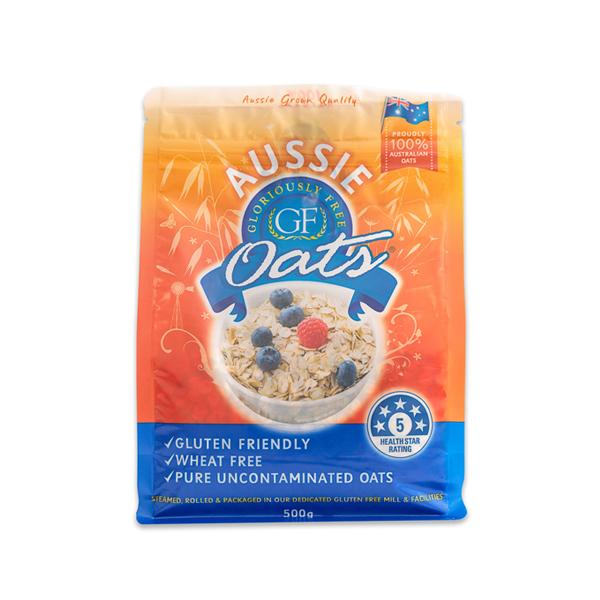 The same oat products in the EU or US would be labelled ‘gluten-free’.

However, most international Ceoliac organisations warn that if a coeliac can tolerate oats (i.e. they don’t have a serious or immediate reaction), it does not necessarily mean that the body is not having an immune response to the avenin.

So, What’s the Conclusion?

To sum things up: Oats that have not been cross-contaminated with wheat or other gluten-containing foods will likely be tolerated by a ceoliac. They will almost always be tolerated with milder conditions such as gluten intolerance.

In saying that, it is recommended that if you are ceoliac, to only consume wheat-free/uncontaminated oats under the supervision of a doctor or other health professional who can monitor your body’s specific immune response.

If you live in Australia with any level of gluten intolerance, or if you are trying to stick to a diet free from gluten, try to always buy oats labelled ‘wheat-free’ or ‘uncontaminated’ from the health food store.

If you live in the US or EU, oats labelled ‘gluten-free’ will be free from contamination from other gluten-containing foods.

In either case, oats contain a gluten-like protein called avenin, which can trigger immune responses similar to gluten in some coeliacs.

Since I’m based in Australia, you won’t see me tagging my recipes that use oats as gluten-free, even though many of you coeliacs could happily enjoy them.

If you know you’ve got the green light for oats in your diet, here are a few of my otherwise gluten-free recipes that contain oats:

Hope this helped to clear some of the confusion around whether or not oats are suitable for a gluten-free diet! 🌱✌️