13 Reasons Why You Should Think Twice About Dairy

The lactation fluid of cows has been consumed by humans for a long time now, but have you ever stopped to think about how unnatural it is? We’re the only species that drinks the milk of another species. It’s only in more recent times that we’ve been consuming it in such mass amounts though. Back in the ‘olden days’ prior to refridgeration, cows milk was enjoyed in its original form, and probably just in small quantities with breakfast.

Nowadays, dairy has become a massive industry. It can be found everywhere you look in the supermarket and is hidden in many packaged foods. It’s even listed as an entire ‘food group’ in most government-supported dietary guidelines around the world.

But the evidence is mounting against our old friend dairy and there are many good reasons to consider cutting it out. Here are 13 of them:

1. THE MAJORITY OF US ARE LACTOSE INTOLERANT

Lactose – the sugar found in milk – is unable to be properly digested by approximately 65% of us. That’s based on our global population as a whole, so depending on your heritage you may be more prone to intolerance than others. People of African or Asian descent have much higher rates of lactose intolerance than people from Eastern European descent, for example.

We all know someone who complains about a sore tummy every time they have a milky coffee or some ice cream, but keeps on doing it because they like the taste. Maybe this is you? If so, I dare you to give it up just for one month and see how you feel. It could just be the best decision you ever make for your body.

2. YOU DON’T NEED IT FOR CALCIUM

Say what now?! But that’s what we were taught in school, and on all those milk commercials, right? I know. But it’s a lie. Calcium is available to us in so many different plant foods (there’s a great list with amounts here) and our daily calcium needs of around 800 milligrams are very easy to meet with a whole food plant-based diet. Most calcium-fortified soy milks actually contain more calcium than regular cows milk.

As a side note, research is finding that other factors – such as exercise and Vitamin D – have a bigger impact on your body’s ability to maintain strong bones than loading up on calcium anyway. This brings us to our next point…

3. HIGH DAIRY CONSUMPTION HAS BEEN LINKED TO STRONGER WEAKER  BONES

Countries with higher levels of animal product consumption, including dairy, actually have higher rates of osteoporotic bone fracture. Got milk for strong bones? Doesn’t look like it.

4. IT INCREASES YOUR WAISTLINE AND CHOLESTEROL

Everyone knows that dairy is high in saturated fat (especially cheese), which is not ideal if you’re trying to lose weight. As an ex-cheese lover, I can gladly say that my love handles went away with my cheese addiction. If weight is not an issue for you, then cholesterol might be. Dairy milk has been shown to increase the bad type of cholesterol (LDL-C) and that’s definitely not cool.

5. DAIRY PRODUCTION IS HURTING OUR ENVIRONMENT

You’re probably aware of the environmental impact of the meat industry, but the dairy business is no exception. There are around 270 million dairy cows on our planet – yeah, I know. That’s just dairy cows. Animal agriculture is a major contributor to global warming, but the sheer number of cows make them the number one issue.

When cows poop, burp and pass wind, a LOT of methane is produced, especially if there’s not sufficient land for the manure to fertilise. This will also quite often degenerate the quality of air and water in nearby towns. Then there’s the issues of land loss and harm to local natural eco-systems.

6. IF YOU KNEW WHAT WAS IN THAT GLASS OF MILK, YOU MIGHT ACTUALLY THROW UP

As explained above, there are just way too many dairy cows for them to receive specialised care. They’re jam-packed into cubicles and diseases spread like wildfire. They often contract mastitis, a painful inflammatory condition that affects the udders, causing bleeding and pussy sores. In factory farms, mastitis is often left untreated due to the cost of veterinary care, causing further suffering for the cow. But there’s repercussions of these diseases and conditions for the final product too…

Traces of pus and blood end up in the milk, and it’s perfectly legal. This is one of the reasons why milk is pasteurised, but all that’s doing is killing the cells through heat – they are still present in the milk! Mmm… dead pus cells anyone? If that doesn’t gross you out I don’t know what would. Yuck!

Casomorphins are morphein-like substances that are found in the milk protein (casein). As your body starts to digest the milk, the casomorphins float on up to your brain and hook onto the very same receptors that opiate drugs would. These casomorphins are concentrated in cheese, that’s why it’s extra-addictive!

When we picture dairy farms, it’s nice to imagine happy cows grazing the green paddocks and wandering back to the big red barnyard be gently milked by the farmer. But with billions of people around the world insisting on dairy for breakfast, lunch, dinner and dessert, this just cannot be the reality anymore. Factory farming applies every bit as much to the dairy industry as it does to meat, but in my opinion it’s far worse.

In factory farms, here’s how it works: Dairy cows are forcibly impregnated (usually with a fist up their hoo-ha), hooked up to milking machines, sucked dry daily and have their young taken away from them immediately after birth, often bellowing for days in grief. After this cycle is repeated time after time throughout the cow’s life, she becomes totally weak and exhausted and is then sent to a slaughterhouse.

What happens to all her babies? If they are female, they face the same fate as her – many would argue this is a far more torturous fate than the male babies, who are taken to slaughter within 5 days of being alive. They are deemed ‘wastage’ of the industry. If you’re a Mumma, no doubt this will pull at those maternal heart strings. This fact sheet gives a good overview of the reality behind most dairy products.

9. DAIRY CONSUMPTION IS LINKED TO SOME SCARY DISEASES

Increased dairy intake may also increase the risk of prostate cancer, ovarian cancer and autoimmune disease. If you live in the US, you are at a higher risk as the US still allows use of a growth hormone called BGH in the dairy industry. Cows who have been fed this hormone produce milk with higher than normal levels of IGF-1 (milk’s natural growth hormone intended to help the calf grow), which is linked to a number of cancers. High milk consumption is also strongly linked to cases of multiple sclerosis.

There’s a book by T. Colin Campbell called The China Study. It’s a fascinating read that documents a comprehensive 20 year study across regions of China and the correlation between their diets and cases of chronic disease. I highly recommend you read it, or at least take a look at the conclusions that it draws. It’s very eye-opening.

If you suffer from acne or even just regular bouts of bad skin, try cutting out dairy before reaching for harmful antibiotics or acne treatments. The lactose in a glass of milk can spike your insulin levels up to 300%. Basically, this causes inflammation near the skin’s surface and triggers a process called glycation that often leads to damaged collagen and a good old breakout.

11. IT MAY TRIGGER TYPE 1 DIABETES 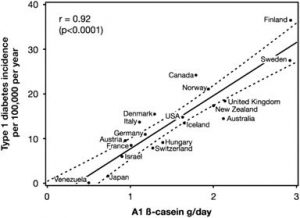 This extreme spike in insulin affects more than just your skin. Studies across a number of different countries have shown a direct link between Type 1 diabetes and consumption of A1 beta-casein (found in most cows milk). Data regarding Type 1 diabetes has also been collected from some major cities in China since the 90’s. This data shows an increase in cases directly correlated with an increase in milk consumption in these cities. This might be something to consider, especially if diabetes runs in your family.

12. IT MESSES WITH YOUR HORMONES

Did you know there are more than 60 different natural hormones present in cows milk? Not surprising, considering it’s a GROWTH fluid intended for calves! Because of this, when we consume dairy it messes with our own hormones. Mood swings, poor concentration, bad digestion, low sex-drive… yeah, your hormones are really not something you want to be messing with. So many aspects of your health hang on them being in balance.

13. THE ALTERNATIVES ARE VAST AND DELICIOUS

With the rapid growth of veganism in recent times, there are yummy new dairy alternatives popping up all over the place. Instead of cows milk you can now choose from oat, soy, rice, hemp, macadamia, cashew, coconut or almond milks – and people say going dairy free is restrictive?! Take a look around next time you’re doing your shopping and I guarantee you’ll find plant-based yoghurts and cheeses and even dairy free ice creams (that are not sorbet!). We’re well past the days where going dairy free or vegan means you have to feel like you’re missing out!

So here’s my challenge for you: try giving up dairy for one month. Have fun with it and see how it feels in your head, your heart and your body. Tune in and really listen to your own body – it’s always wanting to tell you things, you just gotta listen. If you’re struggling to give up cheese – ’cause we all know that’s the tough one – check out my post on how to quit cheese.

Let me know how you go in the comments below 😉